With the advent of CI/CD process, changes are inevitable and continuous. Any changes made to the software applications can produce an unexpected outcome and can impact businesses at large.
Regression Testing is a type of Software Testing used to verify the changes made in an application that does not affect the existing functionality.
After the bugs are identified by engineers (software testers or developers), the developers modify source code to make it bug-free. If this process is completed every day, then it is often known as Continuous Testing. You can refer to the following diagram:

What is Regression Testing?

A testing team performs the manual regression testing at the end of each iteration. Regression testing by this team is completely relied on test cases written during the development phase. Maintenance of test suite is done manually by the team to delete fix inefficient test cases which helps to maintain test suite. The testing reveals issues with particular feature which gets changed often. Development teams identified the defects, rectified them and made the feature stable.

In this blog, we shall discuss the best way to automate the Regression Testing process in CI/CD. 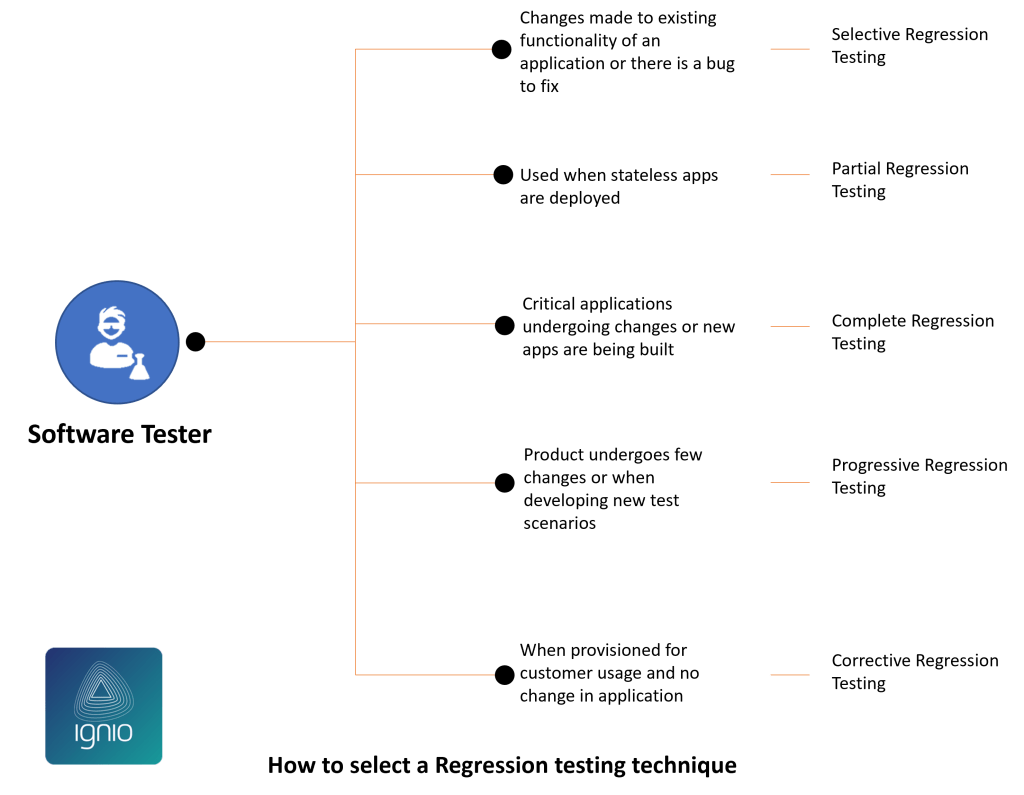 CI/CD allows organizations to deliver software quickly and efficiently. CI/CD facilitates an effective process for getting products to market faster than ever before, continuously delivering code into production, and ensures bug fixes via the most efficient delivery method. Regression testing in a CI/CD pipeline can be used to make releases lean, efficient and intelligent because as it helps in reducing the test execution time, cost and resources and at the same time enhances the software quality.

There are five different techniques of Regression Testing based on the nature of changes made in the software or bugs repaired (or reversely the intention of the testing).
They are as follows:

As the name suggests, this type of regression testing involves execution of only selected test cases from test suite when there is a change in the code. There is no need for running the complete test.
Some of the benefits of Selective Regression Testing are:

1. Faster to test and check the outcome of the code
2. Compare the effect of both previous code and changed code

1. Easy to detect critical bugs in the current code
2. Quick to perform and less time-consuming

Complete regression testing involves the examination of the entire application. It is used when QA testers want to perform a 100% coverage of test cases. This regression testing is usually used in cases where the project owner doesn’t want to make big or more changes during the testing.
Some of the benefits of Complete Regression testing are:

1. 100% coverage of test-scenarios and test-cases
2. Zero bugs get introduced in the application

1. Focused on newly developed app or feature
2. Reduced cost and time to test

1. Rapid check to ensure the application is working well from critical functionality stand-point
2. Can be carried out repeatedly

Why to automate Regression Testing ?

One of the biggest benefits of Regression test automation is that it reduces the dependency on testers and hence frees up the resource.

Regression test automation helps in reducing the overall cost of testing by providing quick executions with minimum use of resources.
It is important for Regression test automation tools to provide self-healing for automated tests generated, thus helping the tests to dynamically adapt to the changes in the code during development. This brings the overall reduction in code defects thereby providing the stability to the product and improving efficiency.

3. Quick to Test and Execute

Regression test automation ensures that tests are run 24/7, 365 days a week. With test scheduler, one can do things like setting up test execution during the night, so no one has to sit around and wait for test results or can execute them at specific time intervals.

Regression test automation, when done in Agile way of delivery, often provides the feedback after every execution, thereby ensuring that defects are regularly rectified or taken care of and the piece of software is defect free before going to production.

CI/CD Architects often want to automate the software delivery process to ensure the software is delivered at speed. Testing is a function that is sought after by many architects for automation. Let us understand the stages of Regression Testing which a QA engineer would perform for Regression Testing and various tools available for its automation.

Typically, there are three stages of Regression Testing :

Here a QA engineer would generate the test-suites (including the test cases and script) based on the code changes made in the application and the time in hand for testing. It can range from hours to days based on the complexity of changes in the applications.
Tools to automate Regression Test generation: Selenium, Appium, and Cucumber help in generating automated test-suites.

After these test-suites are generated, QA engineers or software testers can perform Regression Testing by executing the test case based on their requirements. The test-suite execution can be scheduled or made to run as per the requirement, easily using an automation platform. Continuous integration tools are often handy as they usually demand very little interference from software testers, to find the impact of the new applications, and to identify bugs.
Tools to automate test-suite execution: Jenkins

After the developers make the changes to the source code, Regression Tests also need to be changed. Maintaining the test cases becomes a highly complex process that requires substantial human effort when done manually. Many tools provide self-healing for automated tests generated, thus helping the tests to dynamically adapt to the changes.
Tools to maintain test-suite execution: Healenium

Refer the below example which depicts an idea on the tools used to automate certain stages in Regression automation cycle:

Challenges with Regression Test Automation: Must know for the QA Engineer

There are particular challenges in architecting Regression Testing automation in a CI/CD process using incumbent tools.

Automation of all the three stages of Regression Testing that is test suite generation, test suite execution and test maintenance, can prove to be a big hassle. It includes taking 2-3 tools and involving testers to write scripts to maintain and integrate the tools for automation.
Tools may execute, however, QA engineers still must spend time identifying test cases based on the impact. In the CI/CD process, when many changes are happening every day and are planned to be deployed fast, selecting the right test cases to minimize failure is time-consuming.

Maintaining the test cases while adapting to the changes is the biggest challenge in today’s software testing world. Huge test case repositories are created, which are still maintained by QA engineers manually.

How to automate Regression Testing by applying AI/ML

If there is a scope of automation one should definitely move ahead with the automation. Manual processes are slow, time consuming and tedious. Besides they are error prone. Testing is a very important part of delivering software in a fast and reliable way. So organizations must find the right tool that will fit with your tool chain and will not be a bottleneck while you scale.
The best part is that all these challenges can be overcome by applying AI to Regression Testing. We have come up with ignio AI.Assurance – an autonomous assurance product that enables enterprises to deliver better software faster without any hassle. ignio AI.Assurance can find the business impact of any code change, formulate test-suites automatically, and provide the flexibility of choosing a testing strategy, executing it, and getting success / failure reports in the dashboard.
The QA engineers of Fortune 500 companies trust us to automate all the stages of Regression Testing so that they can focus on other strategic tasks associated with DevOps which they were unable to do earlier, due to the frustrating testing approaches. Now, they can spend more time with their families, eating pizza and getting a good night’s sleep.
Click here to know more. 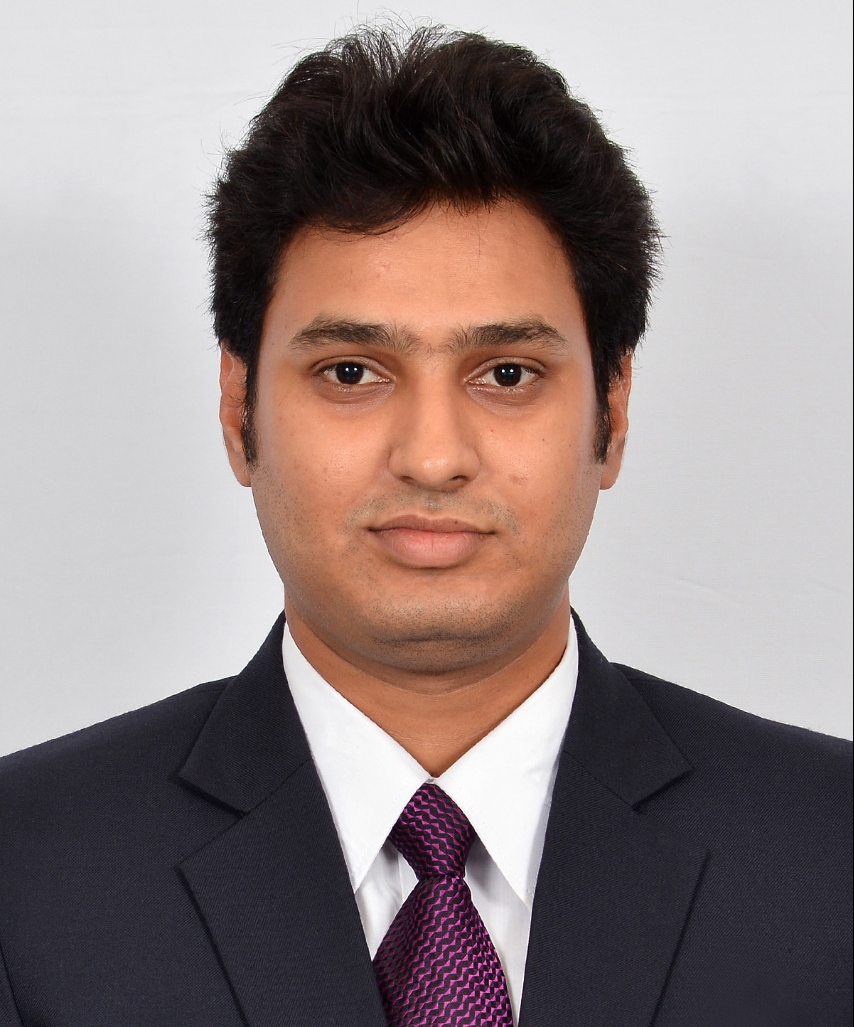